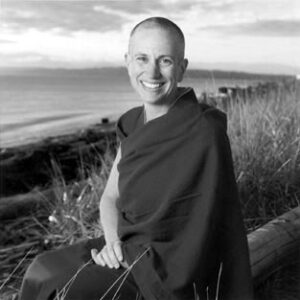 Venerable Thubten Chodron was born in Chicago in 1950 and grew up near Los Angeles. She graduated with a B.A. in History from the University of California at Los Angeles in 1971. After traveling through Europe, North Africa and Asia for one and a half years, she received a teaching credential and went to the University of Southern California to do post-graduate work in Education while working as a teacher in the Los Angeles City School System.

In 1975, she attended a meditation course given by Lama Yeshe and Kyabje Lama Zopa Rinpoche, and subsequently went to Kopan, their Monastery in Nepal, to continue to study and practice Buddha’s teachings. In 1977, she received sramanerika (novice) ordination from Kyabje Ling Rinpoche, and in 1986 she received bhikshuni (full) ordination in Taiwan.

She studied and practiced Buddhism of the Tibetan tradition for many years in India and Nepal under the guidance of His Holiness the Dalai Lama, Tsenzhap Serkong Rinpoche, Kyabje Lama Zopa Rinpoche and other Tibetan masters. She directed the spiritual program at Lama Tzong Khapa Institute in Italy for nearly two years, studied three years at Dorje Pamo Monastery in France, and was resident teacher at Amitabha Buddhist Center in Singapore. For ten years she was resident teacher at Dharma Friendship Foundation in Seattle.

Ven. Chodron was a co-organizer of Life as a Western Buddhist Nun, and took part in the conferences of Western Buddhist teachers with His Holiness the Dalai Lama in 1993 and 1994. Active in interfaith events, she was present during the Jewish delegation’s visit to Dharamsala, India, in 1990, which was the basis for Rodger Kamenetz’s The Jew in the Lotus, and attended the Second Gethsemani Encounter in 2002. She has also been present at several of the Mind and Life Conferences in which His Holiness the Dalai Lama dialogues with Western scientists, and regularly attends the annual Western Buddhist Monastic Gatherings. She is active in Dharma outreach to people who are incarcerated in prisons.

Ven. Chodron travels worldwide to teach the Dharma: North America, Europe, Latin America, Israel, Singapore, Malaysia, Indonesia, India, and former communist countries. Seeing the importance and necessity of a monastery for Westerners training in the Tibetan Buddhist tradition, she founded Sravasti Abbey, a Buddhist monastic community north of Spokane, WA and is the abbess there. It is the only Tibetan Buddhist training monastery for Western monks and nuns in America.

Ven. Chodron emphasizes the practical application of the Buddha’s teachings in our daily lives and is especially skilled at explaining them in ways easily understood and practiced by Westerners. She is well known for her warm, humorous, and lucid teachings. She has published many books on Buddhist philosophy and meditation in multiple languages, and is currently co-authoring with His Holiness the Dalai Lama a multi-volume series of teachings on the Buddhist path, The Library of Wisdom and Compassion. Learn more about the fifth and most recent volume, In Praise of Great Compassion, here. Her Buddhism for Beginners and Open Heart, Clear Mind are widely recommended introductory books.

Many of her talks can be found on thubtenchodron.org in both written and audio form, short daily talks on video, longer video talks, and live Internet teachings. You can also follow Ven. Chodron on Facebook and Twitter.

Eye in the Storm: Why Monastics Matter in the Modern World

Ven. Thubten Chodron, abbess of Sravasti Abbey, reflects on the blessings she’s seen in her over forty years as a monastic, both for herself and the world.

Ven. Thubten Chodron, abbess of Sravasti Abbey in Newport, WA, went forth over forty years ago. Here she reflects on the eight “worldly winds” described by the Buddha and elaborated on by her teacher, His Holiness the Dalai Lama. More information and monastic teachings may be found at https://www.fourthmessenger.org.