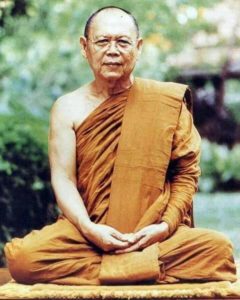 Luang Por Baen was a leading figure in the Thai Forest Tradition after the passing of Luang Ta Maha Bua. He passed away in 2021, being cremated within just three days of his passing, at his own prior insistence. He was a student of Luang Pu Gongmaa, himself a renowned disciple of Luang Pu Mun. Having helped his beloved teacher establish a monastery in the district of Sakon Nakhon, known as Wat Doi Dhammachedi, he later became its abbot when Luang Pu Gongmaa passed away. The monastery became famous for being the location at which Luang Ta Maha Bua is reported to have succeeded in his own meditation practice, but also for the high standard of training given by Luang Por Baen.

He was known for his strict emphasis on austerity and diligence, as well as on all major and minor matters of Vinaya, particularly the duties of monks towards maintaining cleanliness and orderliness with regard to their lodgings, monastery and requisites. His talks are typically stirring and direct, aimed at instilling a sense of urgency in his listeners as well as a determination to practice sincerely and without let-up for the sake of putting an end to suffering.

“Being Ordained” & “The Path of an Excellent Life”: Two Talks by Luang Por Baen

Luang Por Baen, a leading figure in the Thai Forest Tradition, was known for his stirring and direct teachings. These two talks allow readers a glimpse into profound wisdom based on a life of practice.