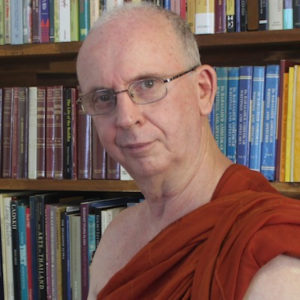 Shravasti Dhammika was born in Australia in 1951 and converted to Buddhism at the age of 18. In 1973 he went to Thailand with the intention of becoming a monk and from there to Laos, Burma and finally to India. For the next three years, he traveled around India learning yoga and meditation and finally ordained under Venerable Matiwella Sangharatna, the last disciple of Anagarika Dharmapala.

In 1976 he went to Sri Lanka where he studied Pali at Sri Lanka Vidyalaya and later became one of the co-founders of the Nilambe Meditation Centre and one of its teachers. Since then, he has spent most of his time in Sri Lanka and Singapore.

Bhante Dhammika had written over 25 books and scores of articles on Buddhism and related subjects. He is also well-known for his public talks and represented Theravada Buddhism at the European Buddhist Millennium Conference in Berlin in 2000.

A Day in the Buddha’s Life

Relying on the early texts, Ven. Dhammika describes the Buddha’s daily life twenty-five hundred years ago. From detailing how he ate to whom he taught, the picture that emerges helps ground and deepen faith.