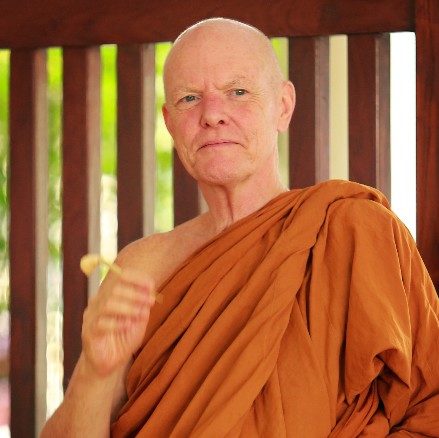 Ajaan Dick Sīlaratano was born Richard E. Byrd, Jr. at Winchester, Virginia in 1948. He began his life as a Buddhist monastic in 1975 in Bangalore, India, where he ordained as a novice monk with Venerable Buddharakkhita Thera. While still a novice, he moved to Sri Lanka, taking bhikkhu ordination in June 1976. In early 1977, Bhikkhu Sīlaratano traveled to Thailand, where he ordained into the Dhammayut Order at Wat Bovornives Vihāra, Bangkok, on April 21, 1977.

He soon moved to Baan Taad Forest Monastery in Udon Thani province, where he lived and practiced under the tutelage of Venerable Luangta Mahā Boowa Ñāṇasampanno and his senior disciples for over thirty years.

Shortly before Luangta Mahā Boowa passed away in January 2011, Ajaan Dick Sīlaratano decided the time was right to establish a forest monastery in America in the lineage of the Thai Forest tradition. In 2012, with the generous support of lay followers in Thailand and the United States, Forest Dhamma Monastery was established on a large tract of woodland in the Allegheny foothills of Rockbridge County, Virginia, where Ajaan Dick still resides today.

Ajahn Dick Sīlaratano reflects on his training under Luangta Maha Boowa, one of the most respected teachers of twentieth-century Thailand.