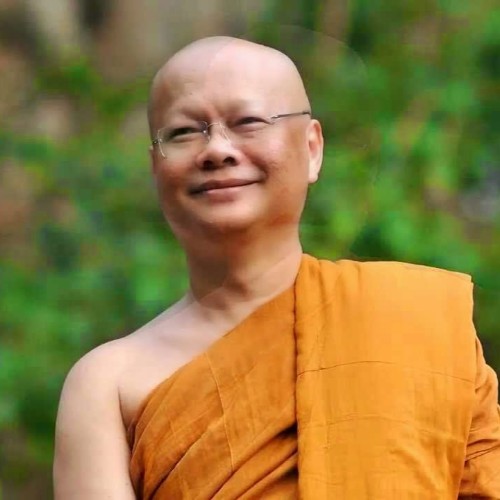 Ajahn Anan Akiñcano was born in Saraburi, central Thailand, in 1954 and received ordination under the renowned monk, Venerable Ajahn Chah, in 1975. Residing at Ajahn Chah’s main monastery of Wat Nong Pah Pong for his first four years, Ajahn Anan had the opportunity to serve frequently as Ajahn Chah’s personal assistant, which provided him the opportunity to develop a close connection to his teacher. After this first intensive training period, the young Anan wandered the forests of Thailand for several years seeking out secluded places to meditate. In 1984, he was offered land in the Rayong province on which to start a monastery, which became known as Wat Marp Jan.

Over thirty years later, Ajahn Anan’s reputation as an accomplished meditation teacher has grown, along with the number of monks coming to live under him. While his teachings stress the fundamentals of day-to-day meditation and mindfulness practice, Ajahn Anan is also known for his ability to articulate the Buddhist path in terms that practitioners of varied backgrounds can understand.  His instruction has attracted a large following of foreigners, with monks from Australia, Brazil, Sri Lanka and elsewhere residing at Wat Marp Jan and its branches. Today, Ajahn Anan attends to his duties as abbot and teacher, looking after a growing number of branch monasteries in Thailand and overseas, teaching visiting laity, and instructing the monks who practice under his guidance.

Renowned Thai Forest meditation master and disciple of the late Ajahn Chah, Ajahn Anan Akiñcano is known for his ability to teach the Dhamma on many levels, from the mundane to the super-mundane. This talk, translated by long-time disciple Ajahn Kalyano, gives a sweeping summary of the entire path of Buddhist practice, from the early stages of meditation to refined states of concentration and insight. An accompanying article can be found at https://www.fourthmessenger.org. More teachings from Ajahn Anan may be found at his monastery’s website, https://www.watmarpjan.org/en

Reflections from Emptiness: Dhamma Quotes on the Path from Ajahn Anan

Thai Forest master and disciple of the late Ajahn Chah, Ajahn Anan Akiñcano is known for his focus on mindfulness of the body and loving-kindenss. This collection of brief teachings stresses both and describes aspects of practice as found in the Thai Forest Tradition.