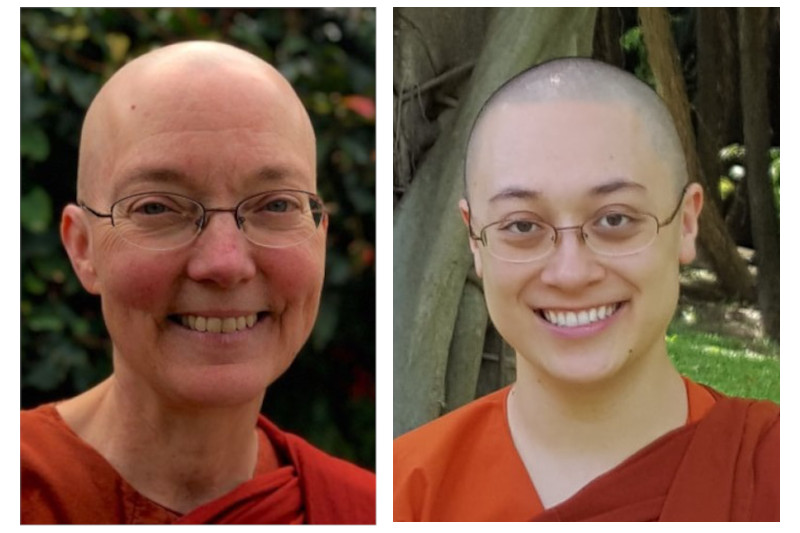 Join us for a Dhamma talk followed by Questions & Answers with Ayya Santussikā and Ayya Cittānandā, at Seattle First Baptist Church’s Fellowship Hall on Sunday afternoon, July 24th, from 3:00 to 5:00 PM. Registration to this event is highly recommended and if you plan on attending online via zoom, it is required in order to receive a zoom link to attend. The event is hosted by Clear Mountain Monastery and Seattle Insight Meditation Society.

Biographies
Ayya Santussikā entered monastic life as an anagarika (eight-precept nun) in 2005, then ordained as a samaneri in 2010 and a bhikkhunī in 2012 at Dharma Vijaya Buddhist Vihara in Los Angeles. She has trained in large and small communities of nuns, including Amaravati and Chithurst monasteries of the Ajahn Chah tradition in England, and is one of the founders of Karuna Buddhist Vihara in Boulder Creek, CA, where she leads the community with Ayya Cittānandā.

After being inspired in 2005 by a college philosophy class, Ayya Cittānandā lived as a monastic at a small Chan monastery in Florida until moving to California, where she worked for two years while making daily visits to Abhayagiri Buddhist Monastery. In 2013, she began looking for a place to ordain, spending time at numerous monasteries before taking the anagarika precepts at Karuna Buddhist Vihara in 2015, samaneri ordination in 2016, and bhikkhunī ordination in 2018.