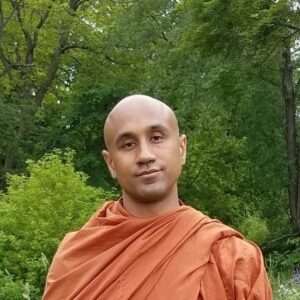 Bhante Joe was born in London, Ontario, in 1983. Growing up, he was interested in business and computers. A spiritual vocation seemed extremely unlikely. However, in high school, he was given a book as a joke, which contained teachings from an assortment of religions. Browsing through it, he came to a description of the Four Noble Truths. Reading about them, he was converted.

He eventually moved in and started training part-time to become a priest. In 2006, he took up full-time training at the temple. However, an attraction to Theravada Buddhism pulled him towards the Thai Forest Tradition. He attended a day-long retreat with Ajahn Viradhammo in 2007. At the retreat, he learned about the newly-established Tisaraṇa Buddhist Monastery. He found his way to Tisaraṇa and was ordained as an anagārika in 2008.

In 2010, Bhante Joe was ordained as a bhikkhu with Ajahn Viradhammo as his preceptor. Bhante trained at Tisaraṇa, with one year in Thailand, until 2015. In 2015, his teacher released him from dependence. He spent six months at a monastery in California and then returned to Canada to stay in the Toronto area.

Bhante Joe stayed in the Toronto area from 2016 until 2019. In Toronto, he associated with the Toronto Mahavihara and the West End Buddhist Temple. In November 2019, he came to Sri Lanka, where he currently resides.

Meditation & Insight: Teachings from the Late Ven. Ñāṇadīpa’s Forty Years in the Forest

By the time of his passing in 2020, Ven. Ñāṇadīpa was widely known for having spent over forty years wandering Sri Lanka. The second installment of his teachings provides insight into the higher levels of meditation and represents one of his final gifts.

Wandering & Study: Teachings from the Late Ven. Ñāṇadīpa’s Forty Years in the Forest

By the time of his passing in 2020, Ven. Ñāṇadīpa was widely known for having spent over forty years wandering Sri Lanka. These teachings, on everything from dealing with elephants to interpreting the Buddhist scriptures, represent one of his final gifts.