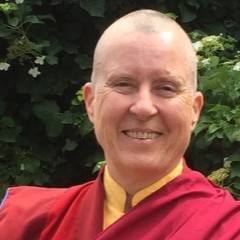 Khenmo Konchog Nyima Drolma has studied with the foremost spiritual teachers of our time including H.H. Dalai Lama, H.H. Drikung Kyabgon Chetsang Rinpoche (the head of the Drikung Kagyu Lineage), and Ani Pema Chodron. After her novice ordination by Drikung Kyabgon in 1997, she received training at Gampo Abbey guided by Ven. Pema Chodron, and attended their shedra (philosophy College). In 2002 she took full ordination as a Buddhist nun in Taiwan. In 2004 she was installed as a Khenmo (Abbot) in the Drikung lineage, becoming the first woman and first Westerner in her lineage to officially hold this responsibility.  She teaches the Dharma internationally. Her current responsibilities, in addition to leading Vajra Dakini Nunnery, include working with the Tibetan/Himalayan Nuns Leadership Program and the international committee for the 2021 Shravasti Rains Retreat.

Khenmo Drolma reflects on how the teachings of her lineage’s founder, Jigten Sumgön (1143– 1217), allowed her to move past the death of her brother and feel compassion even for his killer. Her instructions provide a detailed guide to loving-kindness meditation for all practitioners.