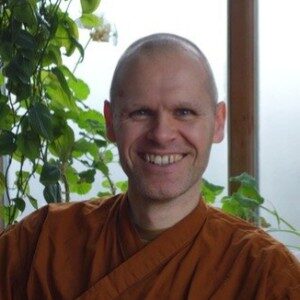 Ajahn Abhinando was born in Hamburg, Germany, in 1966. His first Dhamma teacher was Godwin Samaratne from Kandy in Sri Lanka, whom he met during a weekend course in Hamburg in 1991. The following year he encountered Ajahn Sumedho in Hamburg and was deeply impressed by him. So he moved over to Chithurst Monastery in England, where he was accepted into the Bhikkhu Sangha with Ajahn Sumedho as his preceptor in 1994. Initially he stayed for five years at Chithurst, with Ajahn Sucitto as his abbot and mentor.

After that he also lived at Santacittarama Monastery in Italy and at Bodhinyanarama Monastery in New Zealand. Eventually in 2002 he was drawn to Aruna Ratanagiri Monastery in the North of England. There he served the community as the second monk behind Ajahn Munindo for fifteen years and also started to offer teachings to the many supporters and visitors of the monastery. Since 2004 he is also teaching meditation courses in other places within Europe. In the summer of 2017 he became a member of the monastic community at Dhammapala which, since the hand-over from Ajahn Khemasiri in October 2018, he is now serving as abbot.

In these six poems, Ajahn Abhinando uses judicious imagery and agile turns of phrase to describe an uncompromising path of practice.

In the original German versions of his poems, Ajahn Abhinando uses judicious imagery and agile turns of phrase to describe an uncompromising path of practice.